The Righteous Hillbillies - Two Wheels Down a Lost Highway 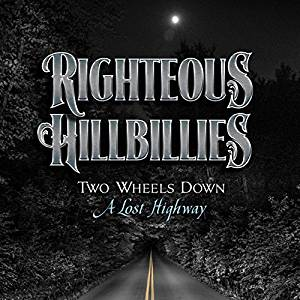 The Righteous Hillbillies - Two Wheels Down a Lost Highway


These sorts of albums used to be commonplace. Our popular music world once rang out with much more than just an assortment of pop releases all revolving around the same narrowly defined melodic conceits, the same regurgitations of pop’s long standing subjects, and pandering to the lowest common denominator. Once upon a time the popular music world hosted both the empty pop idols and a substantive variety of musical genres that remained faithful to their respective forms while still affording the recording artists with an opportunity to find exciting and highly personalized variations of the formula within which they work. The fourth album from The Righteous Hillbillies, Two Wheels Down a Lost Highway, harkens back to a time when bands sported their familiarity with the past as a badge of honor instead of a source of shame. Most importantly, however, that badge of honor has its own distinctive color here; it’s blues, but it’s blues as understood by the five members of The Righteous Hillbillies.


Many fans will hear that their understanding of the genre is total. “Rollin’” benefits immensely from drummer Barret Harvey’s great sense of time and he keeps things percolating thanks to the steady series of rolls that keep the song moving. “Throwing Stones” isn’t nearly as light-footed and airy as the opener, but Harvey keeps all of these songs moving with a loose limbed swing that never lets the songs sink into hamfisted theatrics. Brent James’ singing on Two Wheels Down a Lost Highway hits the highest peak with the title song and the best part of the track is how James’ singing follows the music rather than trying to overcome or outshine it. Every song on the album has an ideal length, but the title song plays out in such an imaginative way that it signals a possible new direction for the band’s songwriting. “Down to Memphis” turns the album back towards a much more traditional slant, but the track shares the same space with the band’s other originals in the sense that it doesn’t lack originality, yet clearly understands the tradition within which it works. Nick Normando’s slide playing is a big reason why many of these tracks are so successful and there are few where that element is more key to the final result than this song.


They dive even deeper into gutbucket blues on the growling “Call Me a Doctor”. Some listeners might hear this song as a pose, but their reactions are shallow. Instead, a closer listen to both the lyrics and the inspired band performance reveals a collection of musicians with great chemistry and the ability to transform the traditional into something all their own. “Drama Zone” is another of the album’s hard hitters and hinges on Normando’s outsized blues riffing, but James’ vocal brings a musicality that might otherwise be missing to this banging performance. The Righteous Hillbillies wrap up their fourth studio album with the acoustic blues “Rock Salt & Nails”, a typically downtrodden country crawl complete with one of the more soulful vocals from James on this release. This is powerful, often heady stuff that has some familiarity with listeners, but is played with such reckless abandon and even a willingness to take chances that one cannot help but admire it.

Posted by Scottie Carlito at 3:59 PM