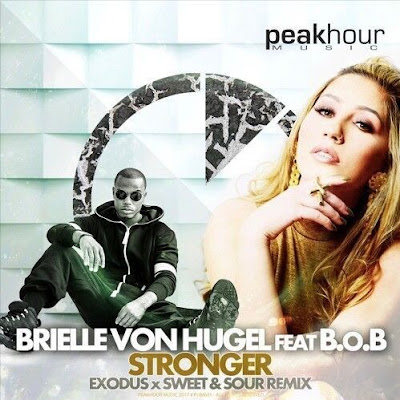 
Brielle Von Hugel’s professional story is one about an indomitable spirit determined to find her place at the table and unwilling to be denied. It simply isn’t enough to just be talented – you have to possess the fortitude to keep pressing and pushing, to overcome and grow as both an artist and a person. Brielle Von Hugel checks off all those boxes. Her latest single “Stronger” is ripped straight from her heart and surges with the raw vitality of youth and passion, but it’s also a superb vocal and musical composition with enormous entertainment and personal value. Audiences will likely hear this as a statement of purpose; whatever roadblocks and challenges are thrown in Von Hugel’s way, she will plow through them and emerge steadier as a result of having endured them. The production, with a mix courtesy of House DJ’s Sweet & Sour and famed producer Exodus, keeps this track fiery from the outset.


The fire takes the form of synths, occasionally coloring the track with enormous flourishes, as well as bass and drum machine. The usual knock on such instruments that they lack the warmth and humanity of more traditional instruments is invalid here. Hugel wants genuine humanity and producer Exodus provides that in tandem with the mix from House DJ’s Sweet & Sour. There’s real warmth and vitality in the way the creators approach this track. The song’s music makes a number of dramatic turns and shifts throughout its duration, but it isn’t restless or inattentive. Instead, there’s a clear path it takes from the beginning without ever sounding too predictable and fat bass pulse emanating from its center provides a meaty anchor upon which Hugel and guest rapper B.o.B are able to hang their compelling vocals. They make the most of it.


Hugel’s vocal is the stuff of music devotee’s dreams. She soars, returns to earth, and fills the lyrics and counterpoints the music alike with the sort of wide eyed emotion that has been her hallmark from the outset. It’s never a hamfisted approach however. Instead, it’s a perfect blend of emotion and objective technique derived from countless hours and years of practice and the discipline it takes to become a great singer. The direct and conversational lyrics have deceptive eloquence because they don’t waste a single syllable in their attempt to depict life’s struggles. Hugel is able to elevate them with her vocal treatment and never risks self indulgence once during the song. B.o.B. clearly relates to Hugel’s theme and the lyrics he offers up during his appearance in the song’s second half provide a great counterpoint to her own contributions. He raps with more than a little swagger and deceptive sensitivity. The chemistry between the voices, lyrical contributions, and backing track come together in “Stronger” to result in Brielle Von Hugel’s greatest achievement yet since her star-making appearance on American Idol. There’s nowhere for her to go from here except even higher than before.