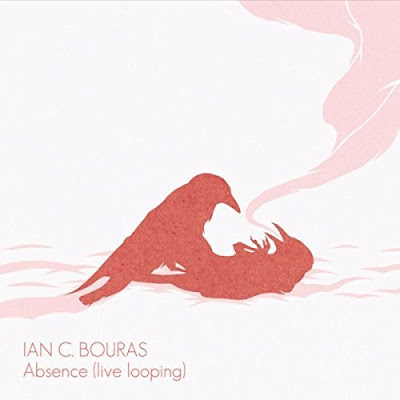 
Absence (live looping), the latest release from New York City based guitarist and songwriter Ian Bouras, demonstrates a potentially neglected side of his skill set – his talent as an engineer and producer. Bouras has an understanding of sound quite unlike many other musicians of his generation and it finds unique reflection in his highly atmospheric and melodically substantive compositions. It is obvious that Bouras put a great deal of thought into the individual tracks and overall running order, but it isn’t the sort of attention that inevitably robs the songs of their spontaneous spirit; instead, it gives these performances a surprising level of intimacy. Absence (live looping) is the next fourteen song chapter in a career that, since first beginning in the early years of the century, has consistently maintained an enormous capacity for satisfying surprises. Ian Bouras’ latest solo album is his best yet and sets the table for his run at future albums.
“While You Were Gone” lays down one of the album’s key templates with absolutely no discernible fat on the performance. Instrumental music, sometimes, has a tendency to meander when placed within a popular music context, but Bouras’ compositional approach makes no such distinctions. This opener and the next two songs “Trappings of Oblivion” and “The Cruelty of Dreams” live and die with this take on Bouras’ musical vision and provide evidence of his ability to sharpen and elaborate on those elements. “Silent Life” is one of the album’s braver numbers in terms of manifesting an unique feel removed from typical considerations of melody and structure. The guitar effects that are a hallmark of his work on the album are definitely capable of creating distance for listeners unfamiliar with the style, but Bouras always leaves varying degrees of melody throughout the collection. “Words Never Whispered” is the album’s longest track by quite a bit and the extended running time doesn’t challenge Bouras’ ability to hold the audience’s attention. If anything, it gives him a chance to stretch out and strengthen this relatively epic number with even greater musical substance and tangible atmospherics.
“Fear of Sleep” has a strong structure and a growing sense of dread conjured through the playing that Bouras never cheapens. The deft touch he uses in bringing about such a mood is a signature quality of the release on a whole, but finds its greatest expression with this number. “Haunted by the Memory of You” continues a theme of the songs addressing lost love of some variety and the hazy romanticism of the playing and melodic ideas certainly suggest vulnerability and often exquisite sensitivity. “Touch the Heart (Ocean Blue)” manages to balance delicacy with a welcome degree of forcefulness and the album’s final song “Until We Meet Again” closes Absence on an expected elegiac note with just enough ambient grace to tie it with some of the album’s other experiments with sound. This is a substantive and unusual musical release from a musician whose career clearly indicates he’s capable of playing any style that captivates him. Absence (live looping) is another involving release from a fantastic creative force in the indie music world.