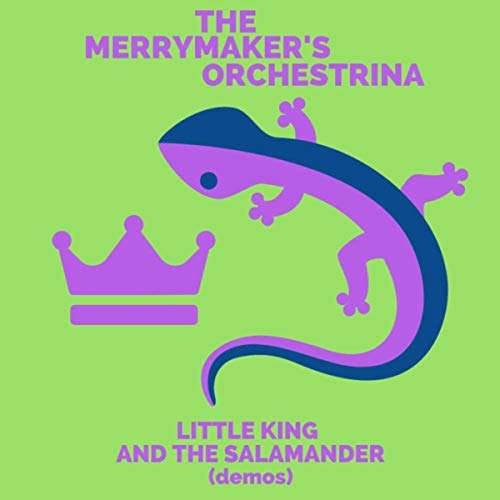 
The second studio release from New York City based The Merrymaker’s Orchestrina, Little King and the Salamander, is what I dub a “hybrid” song collection. The mix of demos, unreleased material, and “b-sides” has a retrospective quality as it clearly looks back on the burst of creativity producing the band’s previous studio release Act 3, but the fourteen song release likewise stands on its own rather than coming off as a musical curiosity. Led by guitarist, singer, and songwriter Ryan Shivdasani, the same eclectic imagination powering the aforementioned Act 3 is evident here as well. I’m quite taken with this collection, perhaps even a little more so than Act 3 as Little King and the Salamander somehow captures the initial burst of creation in a much more intimate manner than even its illustrious predecessor.

It is impossible to ignore the uplift of album opener “Hey Everybody”. It is an instrumental track, for the most part, and builds from Shivdasani’s funkafied electric guitar lines, evocative echo, and swinging drums that hook listeners in from the outset. The rambunctious celebratory feel of the song and Shivdasani’s scat-style vocals add much. There are a number of understated dynamic shifts in the trajectory of “What Fools We Can Be” underlying the emotional gravitas of the song, but it is ultimately Shivdasani’s melodic yet emotive vocal that brings palpable humanity to the song. The touches of acoustic guitar throughout and the careful manipulations of pacing make the arrangement all the more interesting. “The Merrymaker’s Orchestrina” has an unusual vibe, but nonetheless remains accessible. It has a strong jazz influence bubbling to the surface of the song, especially the guitar, but the sound is skewed in a much more individualistic direction rather than pursuing purist ends. The lyrics are closer to performed poetry than traditional pop song words and, despite the flood of imagery, achieve impressive coherency. It is evidence, if more is needed, for how well rounded Shivdasani’s talents are. There’s a 3am dark night of the soul feel to the track

“White Light and Lullabies”, an elegiac sense of burning candles at both ends that grabbed my attention quick. Shivdasani’s restrained near shuffle arrangement for the cut and its accompanying echo are among the keys to the song’s success, but the fatalism of its lyrical content plays a critical part as well. The Merrymaker’s Orchestrina presents “Particle Craze”, a highlight on Act 3, in an earlier and leaner form on this release, but the song retains its power to enchant even in this comparatively spartan form. It is fascinating to hear how Shivdasani’s vision for the song is essentially complete, even in a rough early draft, and the additions distinguishing its Act 3 counterpart now seem more like crowning touches more than ever before. “Jeepers Creepers” is an outlier, a far different expression of Shivdasani’s songwriting acumen than any of the tracks discussed in this review. It does share some superficial similarities with the earlier “The Merrymaker’s Orchestrina” thanks to the sheer delight in wordplay Shivdasani exhibits and the jazz influence casting a shadow over the musical performance.

The jazz overtones of this song, however, are far more free form and spontaneous than anything we heard during “The Merrymaker’s Orchestrina”. Another flavor in the band’s mix rises to the surface with the acoustic track “Slip Away”. It is another track that emerged in different form on the Act 3 release and, like “Particle Craze”, illustrates how Shivdasani’s designs for the song are essentially complete even in an earlier take on the track. Despite its “hybrid” qualities mentioned earlier in this review, multiple listens to Little King and the Salamander reinforce the unique hallmarks of a release that has archival strengths, yes, but that does stand as an independent release rather than marking time until Shivdasani amasses a backlog of new songs for the band’s next studio release. The Merrymaker’s Orchestrina are an unique band in the modern music world, mainstream or indie, and their penchant for invoking retro and modern elements in the same musical breath sets them far apart from business as usual.

Brian Childress
Posted by Scottie Carlito at 10:29 AM