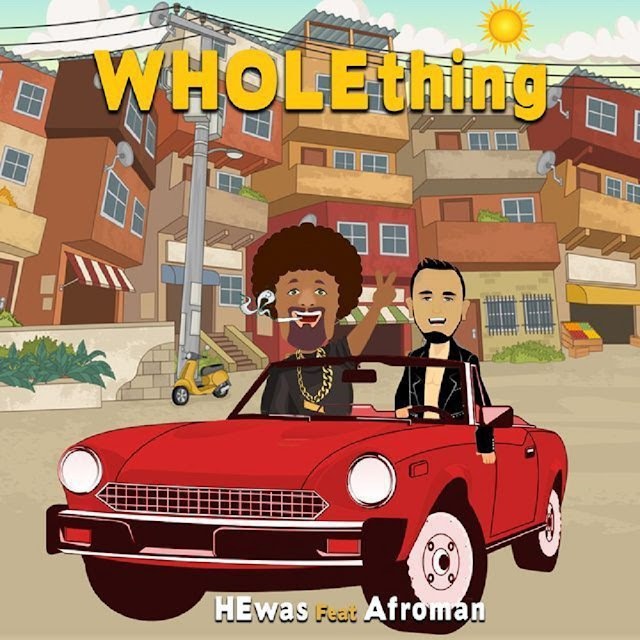 Boston’s Hewas, has collaborated on a new single with the high and mighty, Afroman, called “Wholething.” Hewas’s previous single, “Lemon'' went viral on Tik Tok, with 300 million views, so this is something of an anticipated follow up. Hewas, has an incredibly diverse ethnic makeup, consisting of Dutch, Spanish, and South African, just to name a few. He grew up, listening to Stevie Wonder and Michael Jackson, both of whom have had a substantial influence on his vocal style. Hewas has achieved that rare soulfulness in his voice, most typically associated with Motown greats.
FACEBOOK: https://www.facebook.com/iamHEwas/
“Wholething” is something of a novelty piece. It isn’t likely to be the touchstone of an artist’s career, but it can be a quantifying addition. Things get started with a tropical style keyboard riff, and some console seasoning. The track has something of a swing to it, and a sardonic swagger, that is especially prevalent during Afroman’s part. Hewas shows his love for Michael Jackson, by singing in a tightly controlled falsetto. His vocal abilities are in top form, here, as harmonizes with Afroman and himself. It might be somewhat understated, just how signature Afroman’s sound is. The moment you hear the faintest na na na’s, in the mix, you would know who it is, even if he weren’t already credited. He’s the lovable emperor of indolence, with a touch of raunch, here. Afroman’s cameo is brief, but due to the content, is likely to be the most memorable. He dives deep, and completely embraces the rather dubious character of the song. The synergy, and intermingling that Afroman and Hewas have is exceptional, for two people who likely met on the day of recording. There’s certainly the “boys will be boys” aspect to “Wholething.”
That expression; or more accurately, that concept, is no longer considered as innocuous as it once was, though. One might argue that releasing a song that might be considered misogynistic in 2020/2021, is a risk not worth taking. Others would say that “Wholething” will fly under the radar of most potential scrutiny. It’s entirely conjecture at this point, because as to where Afroman has his fanbase, Hewas is still developing his. What is certain is that “Wholething” is a well written and slickly produced pop/hip hop hybrid style track. The performances are strong, and Hewas shows off his vocal chops. It leaves you wanting more too. I was genuinely surprised at how quickly the song passed by, looking forward to at least one more chorus. This is equally as likely to be intentional or accidental, but it doesn’t make it any less effective.
SOUNDCLOUD: https://soundcloud.com/iamhewas/whole-thing-44k-24b-hdk-mstr-2
“Wholething” is fun and simple. It does have the potential to raise the discussion in regards to “toxic masculinity” and how the entire premise of that term is firmly rooted in subjectivity. Afroman’s character in the song is a married man, who is addressing the boundaries of an intimate relationship with a woman, who is certainly not his wife. Yet, while some might be quick to condemn him for this, we also emphasize acceptance for alternative lifestyles, such as polyamory. The takeaway from a song like “Wholething” is that it can still exist in a time of great sensitivity, and moral debate, opening the door to discussion, for everything.
Scottie Carlito
Posted by Scottie Carlito at 7:31 PM