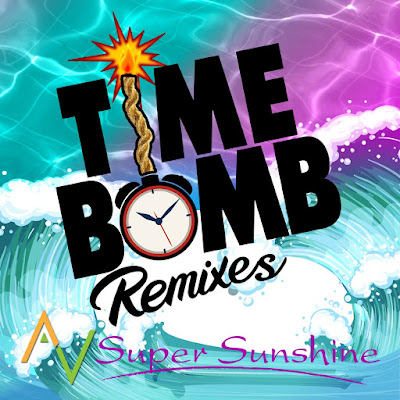 
Dubbed as “New American Rock”, the latest single from Wisconsin’s AV Super Sunshine “Time Bomb” makes that case without ever sounding too ambitious or hyped too hard. Instead, the two mixes coming with this release, a club and radio DJ version respectively, each offer something unique for both casual listeners and more serious music fans. It’s frequently said there is something for everyone when you read music reviews and sometimes it’s true, but rarely is it more substantiated than it is in the hands of AV Super Sunshine than we’ve heard from similar acts. The club mix of “Time Bomb” is full of fury and energy, but there’s more musical strength we hear in this song than we might expect. It begins with a blast of synthesizer gradually intensifying until it erupts into a full on reflection of Michael Bradford’s contributions to the song. This famous DJ and producer has worked with AV Super Sunshine before and discerning listeners will hear why; the two artists possess a clear chemistry perks you up from the first.

The more customary elements of a track are subverted to the electronic instrumentation, but never so much so that they come off as afterthoughts. AV’s lead vocal comes roaring out of the thick, yet bright, mix with assertiveness that commands your attention and the song’s backing vocals merge with the primary vocal in a raucous mashup that will get listeners involved. Other instruments are all but hidden, but they come through at important moments – both melody and guitar make their presence felt in flashes and those points in this five minute+ song tie the track to a needed musical foundation that keeps this mix from being just a ferocious electronic driven number.

The radio DJ mix of the song is bare bones, but equally effective in its own way. It has a lot more focus placed on the lead and backing vocals than we ever hear in the club mix, but it works especially well when placed in a clearer musical landscape like it is here. The synthesizers, of course, do have a strong presence in this version, but the guitar, piano, and drums gives the song a more natural feel than we ever hear in the earlier take on the song. It is, also, much shorter and features the sane fixed gaze on its musical goals. This is, nominally, more closer to the aforementioned label of “New American Rock”, but it still has a lot of the same daring we hear with the earlier mix. AV Super Sunshine’s “Time Bomb” definitely blows up in a big way during both versions and ranks as the best single yet from this exponentially improving rock/EDM master It’s one of the best songs in this style that’s been released in recent years and opens the door to an even more brilliant future
.
INSTAGRAM: https://www.instagram.com/avsupersunshine/