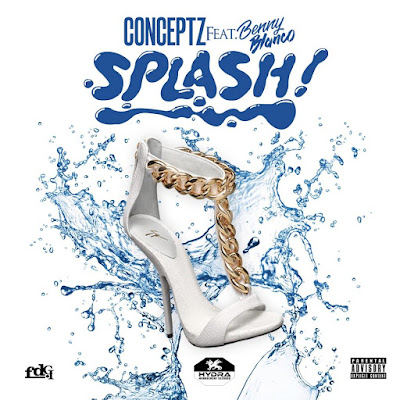 
The clock strikes midnight, and Conceptz wants to know where you’re at. In this life, only a couple of things are certain; we’re all going to die someday, we’ve all got to eat, and we’re all compelled to be drawn towards each other in the most primal ways possible. Conceptz is confident that sexual sparks can be ignited if you open yourself up to the idea, and “Splash” saturates us in an aphrodisiac that is one part mammoth bassline and another part cocky self-awareness. It doesn’t matter if we used to be together and it didn’t work out. We made a connection and it fizzled? It’s back on tonight. We’re going for a dip in the ocean of sensuous sonic grooves that Conceptz is unleashing at us with ease.

“Splash” isn’t as vulgar as some of you might infer by its humorously literal title, instead letting us paint our own imagery of two becoming one inside our own dirty minds, although it should be said that Conceptz gives us a healthy nudge in the right direction from the jump. The backing track sparkles and drones on in the foreground, powerless to dull the sharp rhymes that Conceptz and Benny Blanco are trading back and forth. There’s nothing to stop the anticipation from building to a fever pitch and finally releasing in an elegantly appointed chorus that fades in and out of the ethers like steam rising from hot springs in the dead of winter. Does Conceptz realize the imaginative supremacy they wield? My guess is yes, considering how relaxed and composed they remain in the grit and grind of “Splash.”

The music starts to blend into the lyrics towards the latter half of this song, and if you’re not moving to the churning descent of its patterned beat by this point, I seriously have to question whether or not you have a pulse. “Splash” is as intoxicating as a designer drug and has a high that lasts ten times as long, demanding repeated listens from even the most hardcore of anti-rap music fan. We’re spellbound by the glittering tones and melodies lingering in the rearview mirror as we blaze through verse after verse, and trying to resist the glamour of “Splash” soon becomes understandably pointless.

I’ve never been the biggest fan of hip-hop. I like a lot of classic rap ala late 80’s political hip-hop and early 90’s G-funk, but most of the output from 21st century rappers usually leaves a lot to be desired for my personal pedigree of taste.

Conceptz has made me reconsider whether or not its modern hip-hop that I dislike or just the artists that major labels have chosen to highlight above all others. If a song like “Splash” can stay on permanent rotation in my head for well over a week after first listening to it preparation for writing this review, then maybe there’s a chance that my perception has been askew this entire time. Whatever the case may be, anyone who digs hardcore beat should do themselves a favor and check out Conceptz at the soonest opportunity made available to them. “Splash” is the best rap song I’ve heard in a long time, and my money says that it’s probably better than anything most of you have listened to this year.

Posted by Scottie Carlito at 3:28 PM