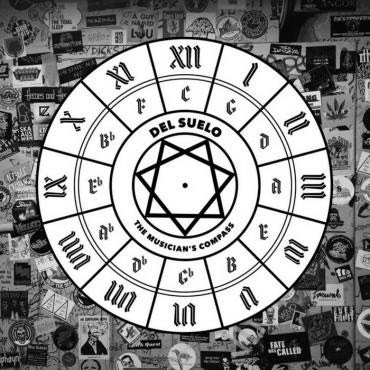 
The Musician’s Compass: a 12 Step Programme is, if nothing else, bold and brave even if it isn’t your musical cup of tea. All but the harshest, most unreasoning critic must concede Del Suelo, a nom de plume for Canadian songwriter and guitarist Erik Mehlsen, has ambition to burn and a willingness to take chances few of his contemporaries would dare try. The dozen songs on his second album with this project constitute a concept release chronicling the life of a musician on tour over the course of 24 hours, from the end of one show into the next day, and Mehlsen’s skill invoking character brings his protagonist Devon to life within a musical framework. He’s likewise set this narrative down in novel format, released along with the album, and this broad based artistry is like few working today. Fortunately for us, he finds his mark
.
“Second Encore”, “Pack Rats”, “A Lust Supreme”, alongside two later songs “Enter the Tempel” and “Caress of Steel Wheels”, are among the smoothest guitar driven soul and light funk compositions you’ll hear in recent memory, but he brings a surfeit of six string supported rock muscle to the party as well. During songs like the first two, Mehlsen’s guitar work is often mind-blowing and never comes close to any of the same masturbatory excesses we might hear from his lessers on the instrument. “Pack Rats”, especially, sparks to fiery life thanks to the song’s instrumental interplay and Mehlsen proves time and again how he’s a musician who feeds off other musical voices. The choruses for each of the aforementioned cuts are simply stellar and put one of his songwriting strengths front and center for listeners; one might expect such a high flown conceptual work to be less accessible, but Mehlsen’s songwriting makes every effort to draw listeners in and keep them with the album until the end.

Some of the riskier highlights of the album come with the songs “Nightstream”, “(What’s the Story) Morning Glory?” and the album’s opus, a nearly seven minute long “Darn that Dream/Stairway to Eleven”. The smirking reference in the last title there, alluding to both an iconic hard rock song and the movie Spinal Tap, is all the more coy considering there’s none of that customary musical bluster to be heard in either part of the latter tune. “Nightstream” is one of most artful moments on The Musician’s Compass: a 12 Step Programme and carries itself with an understated elegance. “(What’s the Story) Morning Glory?” has faded elegiac regret stamped on each section of the song and Mehlsen’s vocal performance is oddly, but pleasingly, reminiscent of David Gilmour’s singing. The chiming guitars give way to some rousing lead work late in the tune and the instrumental breaks take some interesting turns without ever losing the plot.

Del Suelo’s second studio album establishes this project as one of most compelling acts working on the indie scene today and it’s truly tantalizing to imagine how Erik Mehlsen might, eventually, follow up a release like The Musician’s Compass: a 12 Step Programme.