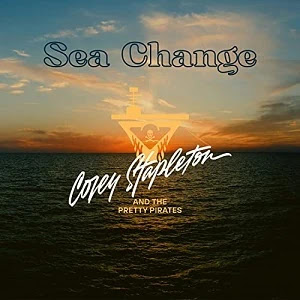 Corey Stapleton “Sea Change” LP In folk-pop, everything starts with a single vocal, and Corey Stapleton has one heck of a voice to unsheathe in the new album Sea Change. While Stapleton has some help from his band The Pretty Pirates, his performance sounds like that of a proper solo singer/songwriter in Sea Change, alluding to personal statements in his lyrics that don’t come as much from collaboration as they do profound introspection. In songs like “Western Son” or “As the Crow Flies,” he doesn’t show us the leader of the band, but a man on his own, searching for the same solace we all are.
URL: https://coreystapleton.com/
There’s a buoyancy to the best harmonies in this LP, such as those in “Make This Work” and “My First Rodeo. Not.,” but it isn’t coming from a boost in the framework of the mix. Stapleton is pretty good at creating some buffering with the arrangements alone, which more or less removes the need for anything synthesized in the big picture. His voice sounds amazing with nothing more than the band behind him here, and I wouldn’t want him to cloud the narratives in Sea Change with a lot of overindulgences we’d likely just get caught up in. Sea Change never reduces itself to hook-centricity, and while “The Coin” flirts with pop themes that don’t fit the shape of the remaining songs in the tracklist, it’s still far from the stock content some of the other hybrid folk records I’ve heard this year have been featuring.
There’s a little more time spent cultivating the tension in “Mosaic” and “The Pen” than necessary, but overall I think we get a good feel for the kind of melodic magic Stapleton can draw, even when he’s biting off a little more than he can chew from a compositional perspective. I love the meticulousness of the way this album was mastered, and although they didn’t need to be as heavy-handed with some of the piano and guitar parts as they were, the producers hit the nail on the head in keeping Stapleton’s rich lead vocal as the linchpin no matter which of these songs we’re listening to. He has his sharpest weapon out and ready to rock from the time we press the play button on the opening title track, and to his credit, he never has to put it away in the name of attracting a younger audience - honestly, the opposite is closer to the truth.
APPLE MUSIC: https://music.apple.com/us/album/sea-change/1611360397
Corey Stapleton plays like a man who has a lot to prove in Sea Change, but he’s sounding like a much more qualified singer/songwriter than a lot of his competitors in the international underground have been lately as a result of this potent effort. Sea Change is a decent-sized LP that shows us a lot of potential in Stapleton and, to a lesser extent, The Pretty Pirates, but if it’s really just laying out a prerequisite blueprint for this group’s next release, my gut says that the melodic efficiencies of this album are just a taste of what’s to come.
Scottie Carlito
Posted by Scottie Carlito at 1:59 PM