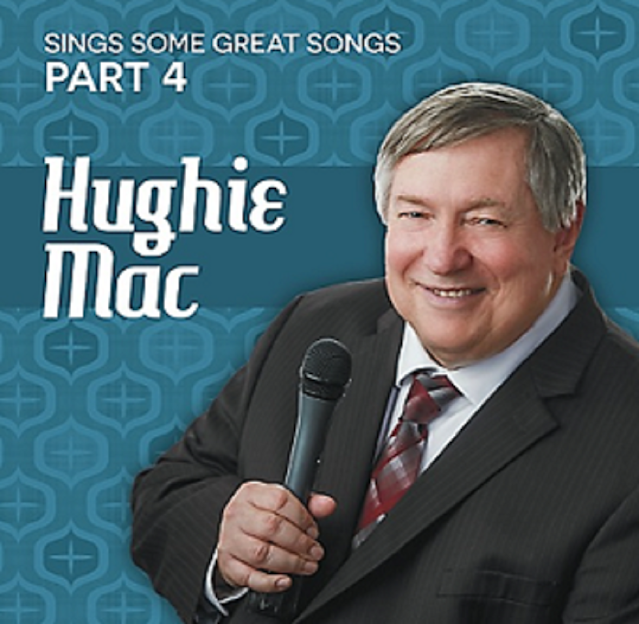 The sheer variety of pop songs Hughie Mac covers on his most recent release, Sings Some Great Songs Vol. 4, means there’s something for everyone amidst the album’s twenty-three(!) cuts. He touches on a virtual who’s-who of mid-20th century American music including performers as diverse as Garth Brooks, Nat King Cole, Glen Campbell, and Frank Sinatra, to name but a few.
Legendary or relatively obscure, it doesn’t matter, Hughie Mac treats each of the album tracks as an investment of his time worth every second and his love of performing for any audience, listening to an album or live, comes through loud and clear on an assortment of the tracks. Opening with “Almost Like Being in Love” serves notice that Mac is intent on entertaining listeners. The track selection for this album culls from universally well-known and regarded material common on television and film, as well as radio and album. He achieves a level of intimacy during this and later songs that’s reminiscent of an old pal performing for you.
Breaking down that distance, perceived or otherwise, between the artist and audience helps garner a wider base of fan support. His take on Garth Brooks’ “Two Pina Coladas” is recent enough for it to likely be one of the album’s popular numbers. It isn’t every singer of Mac’s type who would dare break from the pop leanings dominating much of this release to cover an artist often considered as country as they come. It won’t be the last time.
He hits a travel theme for the back to back duo of “Come Fly with Me” and “Fly Me to the Moon”. Both are among the album’s best, but the latter will get more of your attention thanks to an especially zestful Mac vocal. Some of his selections come from musical theatre and “I Gotta Be Me” illustrates how Mac makes no distinctions about the source of his material – a good song is a good song. His warmth and even a playful edge emerge in his cover of the classic “The Glory of Love”. You can hear him smiling, it seems, as he glides through the song’s unforgettable vocal melody. It’s so simple, but he makes it so much fun. There are a few Sinatra songs on this release and scattered over the Sings Some Great Songs series and his rendition of Ol’ Blue Eyes’ “New York, New York” is among the best.
He doesn’t ever attempt to outright mimic Frank but, instead, approximates Sinatra’s performance while bringing something of his own. His performance of “Don’t Get Around Much Anymore” closes the album on a big brassy note that says goodbye with a nod and wink rather than grandstanding despair. This performance puts a bold exclamation point on the near-epic collection. You might expect his energies to wane by this point, but Hughie Mac’s Sings Some Great Songs Vol. 4 is the work of a performing artist engaged at every turn with their material. It’s the sort of complete experience that encourages you to keep coming back for more.
Scottie Carlito
Posted by Scottie Carlito at 8:06 PM