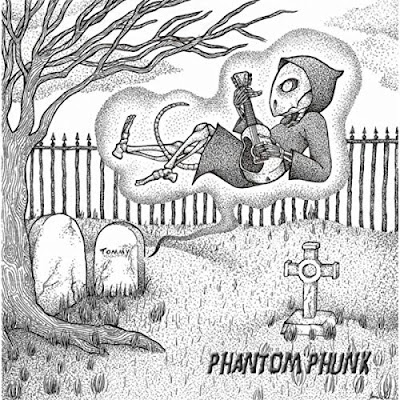 
Some bands can and want to do it all. Phantom Phunk from the South Florida doesn’t restrict themselves in anyway and anything that works to improve a song falls within their wheelhouse. The artistic bravery pushing this sort of confidence to the fore can be heard across the board in the band’s first release Arboles Ossific. It’s a ten song collection that leaves few stylistic stones unturned in the band’s search for the right mix of musical ingredients and their instincts for what works and what doesn’t couldn’t be better developed. The four piece eschew virtuoso and star trips, preferring to largely remain anonymous in the hopes that their work speaks for itself, but it is apparent that, despite their relatively young ages, they possess a combined talent that would be the envy of much older and established headliners.


The combined talents are fully evident from the first song on. “Snowy in Florida” will leave you breathless just listening to it because the band literally never rests for even a nanosecond. They come at the audience with a wide variety of emotional tones ranging from full-on rock attack to knotty progressive influenced passages. They pull back on that in your face approach on the album’s second track “Sip of Wine” and show listeners the first example of their ability to create suggestive musical landscapes with precisely chosen notes and a sense of restraint that may not be so evident on other songs. They also distinguish themselves lyrically with by exploring the love song theme with a distinctly different and almost literary voice. Their engines rev again for the uptempo romp “The Unheard Spirit Symphony” which, if one wanted to, can be viewed as a natural “sequel” of sorts to the situation depicted in the song before. It has a strong commercial feel too which, thankfully, never panders for the listener’s attention.


They turn in a more traditional direction with the track “Hey There” and the classic rock tropes that they throw towards their listeners find their mark. “Looping”, indeed, has a gentle looping sort of effect in its arrangement and its uptempo energy, while not quite as frantic as the earlier song “The Unheard Spirit Symphony”, easily carries listeners along to the song’s inevitable conclusion. The album’s sole instrumental track, “Distant Kaleidoscopes”, proves without any doubt that the band can succeed in delivering compelling performances sans lyrics and provides a brilliant segue into the penultimate track. “Tommy’s Cosmic Avocado” might be bizarrely titled, but the song is anything but. It’s the album’s longest track but never sacrifices accessibility to make some grand statement.


This is a band with a boundless future. As mentioned at the beginning, this is a band capable of doing anything and they cut a vivid swath across this ten song collection pursuing their musical ambition and scoring in a big way. Phantom Phunk’s Arboles Ossific is the first salvo of what will surely be a musical run full of fireworks and creativity.