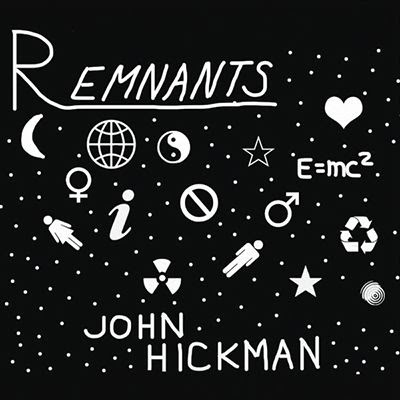 
When John Hickman said farewell to his longtime career as an aerospace engineer and began work on what would eventually become this album, he showed enough wisdom to recruit the best session musicians in the Seattle area. The twelve songs on Remnants benefits enormously from the highly polished and creative backing Hickman receives from these collaborators. The production stresses guitar work, vocals, and the rhythm section giving the songs a nice balance of the upper and lower register. His vocals aren’t quite mainstream pop owning to a bit of a nasal quality in his tone, but his range is quite surprising and he has intelligent phrasing and a talent for emotiveness that will surprise many.


His voice gives a sharp melodic lift to the otherwise romping, synthesizer laced rock track “Cascade”. It opens on a resounding note and Hickman responds with a rousing, challenging vocal that commits itself to every word.  “Escape” has a similarly urgency balanced out against a compelling rock dynamic powering the song. Once again, the rhythm section sets a massive tone and has moments when the track sounds positively monolithic. The beaming pop rock energy of “Hello Hello” has some teeth as well, thanks to the electric guitar and the drumming, but he conclusively proves he can bring off a breezy pop gem with the best of them. Equally so, Hickman is quite adept with the acoustic guitar and his resplendent turn on the largely folky song “Passing Thru” is another sterling example of Hickman’s talent for touching on resonate musical themes without relying too heavily on formulaic elements.


The Dystopian sci-fi lyrics and darkly lyrical piano opening “Remnants of the Human Race” create a mood quite different from anything preceding it. Though there are later songs that run longer, it’s difficult to escape the feeling that this is one of the album’s key pieces. Hickman invests an impressive amount of emotion into this elegiac number. “Soiled Dove” is some more top shelf pop with superb melodies courtesy of piano and discreet strings underpinning the song. The drumming, so brash and physical on earlier songs, tempers its touch on these later, much more considered efforts. The harmony vocals have quite an ethereal touch and the song has a steady glide many listeners will find very appealing.


The brash exuberance that seems to have disappeared from the album returns with a vengeance on the song “Talk”. Enormous synth lines draw most of the listener’s attention and certainly serve as the lead instrument, but there’s subtle secondary things going on and the entire thing wouldn’t have a chance of holding together if it wasn’t for another volley of incredible drumming. He turns introspective again on the track “What They Told Me” and it makes for one of the most effective songs on Remnants. Hickman’s vocal and lyrics embody the best about this album – his personal bravery, the open-heartedness of his vocals, and the effortless way he connects with his audience. By any measure, Hickman’s debut is a resounding success.


Joshua Stryde
Posted by Scottie Carlito at 10:22 AM