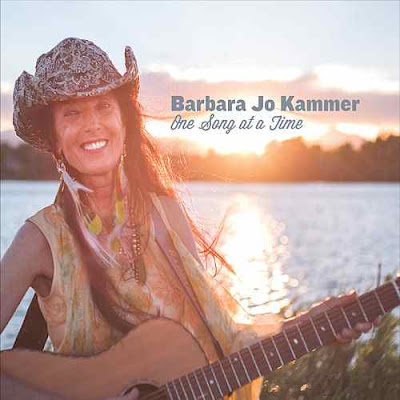 There’s a lot of personal meaning in this collection and, certainly, anyone who has experienced the punishing lifestyle that defines the life of an addict will find much here to relate to. It isn’t the whole story about Barbara Jo Kammer’s solo debut, One Song at a Time, however. The vibrant musical tapestry she weaves with her collaborators makes this an entertaining listen from the first and that spark never dims over the course of the album’s ten songs. She maintains a level of energy ably matched by her band mates and they respond with on point performances that help these tunes reach their fullest potential. It’s all presented against the backdrop of a superbly rendered production job that doesn’t sound like the product of an independent operation whatsoever, but rather top flight professional and with a keen ear turned towards balancing her voice against the instruments.
“I Can See Clearly” is an ideal example of what Kammer is capable of covering other artists. She recasts this iconic pop tune as a high-stepping bluegrass tilt and the definition the individual players achieve is quite impressive. Their unerring accuracy reveals itself in every minute of this tune and it results in one of the album’s most complete performances. “Choices” joins its company, as well, in that regard while coming from an entirely different place musically. This is a song pulled directly from the classic country tradition and its decidedly adult lyric about struggling with alcoholism is surely one that affected Kammer profoundly the first time she heard it. She delivers a wrenching performance here that goes beyond just hitting her marks and has a transformative quality all listeners will respond to in some way. “Hard Promises to Keep” is another deep nod to country music tradition as it sets itself up as a classic ballad and duet between Kammer and the fine vocalist Greg Blake. Blake’s lower register smoothness has its own emotive quality, but it’s different enough from Kammer’s that the juxtaposition of their voices takes on a compelling aura.


“In a Cabin on the Mountain by the Pine” is written by Robert Backlund, a friend of Kammer’s, and this well honed invocation of rural life and its peaceful qualities comes across quite nicely thanks to the wealth of specific detail and Kammer’s expert reading of the song. “The Winning Side” embraces a more modern country vibe without surrendering any of the traditional instrumentation that gives the album such a vintage sound and Kammer’s singing for this particular performance ranks among her best outings on a great album. She wraps One Song at a Time up with an equally involving performance of the Jimmie Rodgers classic “Mule Skinner Blues” and, while it was written for a male voice, Kammer doesn’t let that get in her way of owning the song completely and making it sound like the tune was written with her in mind all along. This is one of the best traditional releases of 2017 and we can only hope that Kammer follows it up with an equally powerful sophomore effort or something even better.