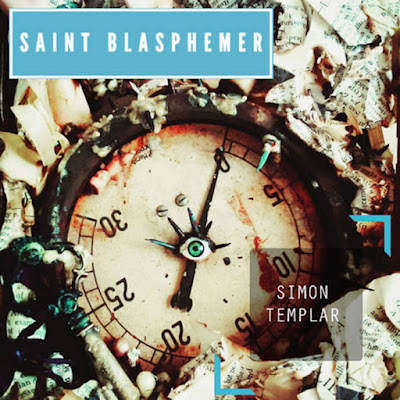 
The four members of Southern California’s Saint Blasphemer aren’t musical babes in the woods. Thomas Hudson, John Castellon, Steve Shell, and Steve Ybarra have been kicking around the Santa Ana music community for a number of years and their union under this moniker is an unique marriage of complementary artistic aims and sheer, undeniable chemistry. Their five song EP Simon Templar is a powerful and often frightening examination of the ongoing heroin epidemic that has felled many of their friends and family while simultaneously sweeping across much of the community. They play a very distinctive brand of hard rock/heavy metal infused with an audible strain of punk rock attitude and the production captures them as a very live sounding unit who play with a great deal of fire and spontaneity. Saint Blasphemer has a message to deliver, but they are never too preachy and even the direst of their warnings isn’t without genuine compassion and warmth.


Simon Templar opens with a blast of rugged riffing entitled “Nullify”. The song eloquently and, sometimes, explicitly describes the mindset of a sick addict better than perhaps any other song of this ilk. It’s instrumentally quite excellent, particularly John Castellon’s lead guitar. There are only a few scattered moments on this release where the instruments take any flashy turns so, when they do, Saint Blasphemer makes those moments count enormously. The typical use of guitar on the EP comes with the second and title song “Simon Templar”. It has a compositional approach that looks to mesh well with the bass and drums, but looks as well to tailor itself to the musical backing. Hudson’s lyrics speak with the authority of the survivor – there’s horror, anger, and grief in ample measure heavily weighing on this song. The mid way point of Simon Templar comes with the track “Scarecrow”. If the first two songs bowl listeners over with their wealth of detail, Hudson turns up the heat even more with this gruesomely specific vision of the long term soul-stripping effects of use. The musical backing practically bristles with tension, but they make excellent use of theatrics moving between darkness and light before ending the song as suddenly as it began and concluding it with a decidedly muted coda.


“A Perfect Rose” has an exquisitely crafted and careful opening with Hudson’s vocal yowl taking on an appealing haunted, blue tone. His emotive range is a big part of Simon Templar’s success with “A Perfect Rose” because you can feel his pain for the song’s subject in every line and he never delivers those lyrics in a histrionic or heavy-handed way. Simon Templar ends with the song “Breaking Just to Bend”, a wonderful title considering an addict’s typical wont for demanding everything or nothing at all from nearly every situation. The band tackles the song’s uptempo pace with unmatched vigor that ends the EP on a definite high note. None of the EP’s five songs are very long, but taken as a whole, this release provides a fair window into the extent of this band’s talents and hints at future glories to come.