Sam Green and the Time Machine 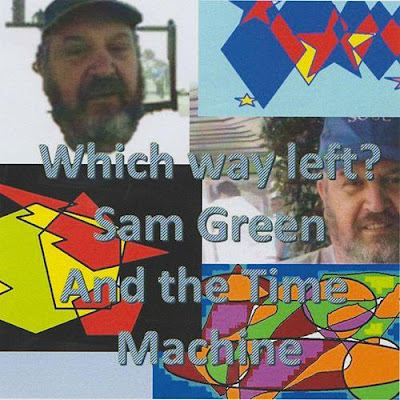 Sam Green and the Time Machine


The Time Machine is Sam Green’s chosen way to get his music to the world, to be found at CD Baby and at his own web address. Which Way Left? is the new release and it gives a little hope to those looking to sooth their heels into some fresh streams of his words of wisdom, backed with some instrumentation that comes off clumsy at times, but serves his vocal prowess well enough to dismiss as a development wrinkle. The music isn’t produced with any gloss to speak of, so it shows a weakness in that respect, but everything else is in satisfactory order and on the level that he’s currently at.

“Dendeong Ranges” is more of a ditty than a song approach, but there are tracks of both structures throughout the CD. This is about the hills of his surroundings, but the music doesn’t pick up enough to show what’s to come. It falls short of good song but it tells a story his own can relate to, so it works for that purpose anyway. The following track “Eli” isn’t the shining point either, but it’s the opposite as far as a song goes. This is a very good piece that proves Sam Green is a good musician and songwriter. But that could already be evident to those who know and have consumed his work, of which there is much to be found. “Financial Year” doesn’t resonate as much as the first two, but that’s because of its obvious political and economic subject matters, but it keeps the personal side of his work in check. Anyone with a mission can understand where he’s coming from. On “Google Me” he makes some sense of humor pay off on relating to the cyberworld’s role in relationships. And the humor stays in-tact with his take on “Harry Ginagin” which also keeps the energy upright. Not that it’s all low energy, but even pop-folk, which he is tagged, can be dreadfully soft sometimes. Most get a little of both in to stay balanced, as he does.

On “Part Of The Corporate” it might get a little politically overboard, but he speaks anyway, and does get heard, but are the masses listening is always the question. If you’re into folk and looking for the usual stuff ragged upon by every folk singer/songwriter imaginable, then it suits you right down to the heels. “Round And Around” is high on the list of pleasers and so is “Mist Of The Desert” and “Lightning Never Strikes.” Both of which he turns in some of his finest musical offerings. In fact all three of these tracks are in the top of the whole 14 of them if I were to rate them that way. But I would also call the sound mix uneven in places. It also sounds like Sam Green improvises a lot, and that’s just about the best thing you can say about a piece of music, but there are some well thought out, superbly-crafted tracks on this CD. If anything, it makes you want to hear more from the artist, which keeps to outdoorsy vibes more than tackles every day issues. This is for rolling up your pant legs and wading your feet in the cold water, while listening to some relaxing music to end a long day, or just shooting the breeze on the headphones to. Life isn’t that serious, and Sam Green reminds of that and how to let it all hang out.