Rhett May - Creatures of the Night 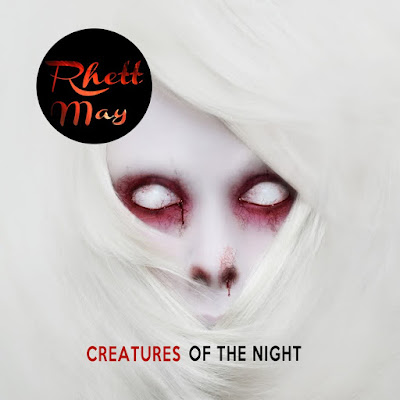 Rhett May - Creatures of the Night


The latest release from Australian based singer/songwriter Rhett May, Creatures of the Night, is a thirteen song collection solidifying his standing as one of the indie scene’s best musical artists. It’s the next bracing step in a thrilling musical journey spanning forty plus years, two continents, and brushes with iconic artists. May brings many of his formative influences to bear on the album’s songwriting but, despite his age, the tracks on Creatures of the Night bristle with modernity and an adult point of view full of vigor and imagination more commonly associated with much younger artists. The production snaps with the top flight fidelity we associate with major label acts and there’s a sharp balance achieved between the instruments that makes the thirteen songs sound like an unified, coherent listening experience. Creatures of the Night is an entertaining and highly intelligent reminder of what a quality songwriter and musician can accomplish.


The opener is such an important number from any musician or band. “Somebody’s Watching You” brings newcomers into the burning heart of May’s creative with its combination of rugged rock and roll guitars, scintillating lead work, and surprising amount of melodic value. May isn’t just a superb songwriter and musician – the song’s lyrical content is quite good and May’s observational powers shine through. The title song, “Creatures of the Night”, is one of the vivid experiments on the album and wholly successful. May’s arrangement for the song has a surprising amount of delicacy while still ably managing to conjure reams of atmosphere. “Latex Lady” is one of the stellar tracks that make Creatures of the Night really fly. The same quasi orchestrated approach May takes on the album’s most successful rock tracks hits a peak with this number and the adult subject matter of the songwriting never hits a prurient note.  “Sandy Sweet As Candy” is a hard rocking number with gutsy and tough-minded guitar work – the lead guitar playing is rather fiery.


“Space Between Breaths” is another meditative, moody track tailored to a similar length as the other tracks. May’s focus throughout the release is one of the great strengths of the album and few tracks better embody that strength than the title song and this track. It takes a substantial amount of talent to bring these disparate elements together in a track with a definite shape and thrust. “Elixir of the Gods” is the lengthiest song on the album and shows off May’s wont for challenging listener’s preconceptions. Some of his eastern musical influences come through here and the exotic feel adds much to the song, but what makes it work in the end is how May combines those twists with solid fundamentals. “Lexxi Mccoy” and “Bella My Baby” are two more solid shots of pure rock and roll that are entertaining, but there’s equal parts intelligence and artistry driving these tracks. May surprises us a final time with the album’s closer. “When We Make Love” is a stab in the direction of classy jazz and doesn’t sound out of place at all with the album’s numerous rock performances. Creatures of the Night will appeal to a wide swath of fans and those introduced to its charms will bring him countless new fans.


Montey Zike
Posted by Scottie Carlito at 11:40 AM