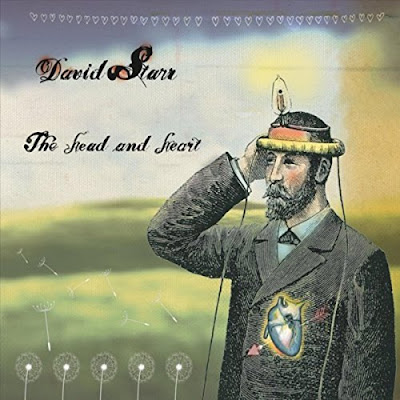 
With Arkansas roots and Colorado wings, David Starr has been making music since the age of 10. He is an Americana singer/songwriter, multi-instrumentalist and producer with hundreds of live shows and seven releases under his belt both as a solo artist, duo artist and member of the David Starr Band. “The Head and Heart” is the new EP.
If you know David Starr from the David Starr Band or not, and you like acoustic driven numbers with great vocals, The Head and Heart will win both over for you. There is no beating the likes of such a producer and Starr is no stranger to John Oates. And together they pull off some beautiful material on this EP with not one bad note on it, which includes a good cover of “California Dreaming” and some smoldering original cuts around it for a serious but also somewhat playful release. It opens with the dramatically inflected “Edge Of The World” by establishing a meaningful vibe, which is laced in the music, as well as the lyrics. But if you’re looking for up-tempo bombast, you won’t find it on this EP.

Having played with the likes of everyone from John Oates to Steve Cropper and others, this is a world class artist, so you get world class writing and playing. When you’ve been around the block, this much it to be expected but perhaps not in every music genre. But this is not an adventure outside the box, with, the exception of the efforts to make the Mamas and Papas proud by putting a twist on it. If that does make you stand up and listen, then the rest is even better but this is no novice attempt either. It has the luxury of succeeding on its own merits. But it takes nothing away from the rest of the set of otherwise wonderful songs.


Another one, aside from that and the lead off track, is “The Head and Heart” itself. With a soul stirring outcry for organization of the heart and minds decisions. It is a heartfelt but mindful song that gets the overall point across that he is ultimately trying to make. These decisions sometimes cannot be reconciled. If you stay on the level they can be balanced, but get off balance and be wrong with yourself. It deals with that and more, but so do all of the subjects on offer, including “Waiting In The Dark” with its slightly more musically energetic moments. It turns out to be one of the strongest tracks, as well as my favorite pick.

But also brought to the party is “I’ve Come For You” with it’s also more upbeat groove. This even starts to rock a bit here and there, to make it even more entertaining, but it keeps that to a minimum throughout. But you just can’t deny the easy listening ability behind this. When you hear it the second time you already feel like you’ve heard it a hundred times. It’s as good as anything else on the whole EP, which is a true mark of its consistency. It leaves you knowing the final track will be good, as long as you’re still listening to what has been described as nothing but good old fashioned music with contemporary passion.

“Dancing With My Pride” brings it back to a simmer as it takes the EP out. It’s a ballad but it cooks not unlike the other tracks, but let’s you know how serious it all is. Nothing heavy-handed, just another lighthearted but very meaningful song. But it even holds its own with anyone who likes good music, it just fits well at the end of some well-crafted enjoyable pieces, so it is yet another compliment to it all. And if David Starr isn’t where he wants to be thus far in his career, he never will be. So, you get the full treatment and that is not always easy without a longer track list to prove it, but it stacks this one up ten-fold.
SOUNDCLOUD: https://soundcloud.com/david-48-1