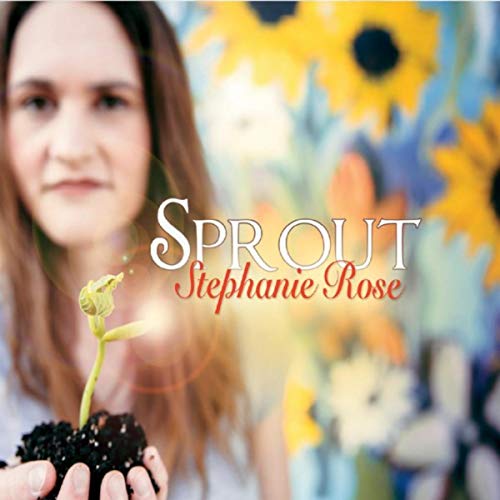 “Sprout” the title song for Stephanie Rose’s second studio release, gets her sophomore effort off to a rousing start while going places many of her peers wouldn’t dare follow. She’s definitely reaching for an old school vibe during the song’s first half, but she’s venturing elsewhere soon enough by incorporating brass into the song’s arrangement. What might sound, on initial impression, as being woefully out of place on a country album actually works as an astonishing stab towards a new sound for the genre. Longtime fans of the form will recall that, as far back as Western Swing music and Johnny Cash’s “Ring of Fire”, horns can make a difference in a style not often known for that sound. “Rusted Love” is much more business as usual, in some ways, but Rose is equal to revitalizing this style as well – her take on classic country flavored AOR rock has a physical, involving sound and the song’s arrangement coupled with her lyrics has an almost cinematic air.

“Sprout” bristles and bounds with life. It’s a nice feature of Rose’s music that, even when she’s singing about very adult topics, her vocals and music alike are embracing life and an upbeat swing throughout. There is one notable exception to this and even that approaches the same aesthetic, albeit from a different angle. It’s hard to consistently pull off a marriage of serious material with such vibrant musicality, but the best can do and even the understated musical touches in this song, like organ, end up only enhancing its soulfulness.

“Rusted Love” is another great lyric with an accompanying great arrangement. Rose, on this one, goes a much different way than the EP opener but nonetheless keeps close to her roots – the same spirit inhabiting the first song gives this one life as well. She is more than capable of making her voice work within a rock influenced arrangement, but Rose doesn’t go too far – the connections to her country background still shine through.

She shines in a much different way with the track “Luxury” and it raises an already excellent EP up several notches alone. Piano and violin are the critical musical pieces making this arrangement fly and they find a more than worthy performance partner in Rose’s best vocal on Sprout. Her voice encompasses worlds. There is passion, heartache, enormous empathy, and even a sense of victory glowing throughout her vocal and it lights the song up with inspired life.

“Old Soul” has a fat bass pulse at its center that gives the song an irrepressible heartbeat and the rhythm section, as a whole, provides Rose with the platform she needs for one of Sprout’s most likable vocals. The lyrics have a lot of charm as well, especially some well chosen rhymes, but there’s self-knowledge and wisdom underlying the song as well.

“Same Old Same Old” concludes Stephanie Rose’s second EP release in a restrained, thoughtful way, but it isn’t difficult to hear the playfulness in this performance. She makes great use of harmonica in this song without ever steering the track into any specific musical camp and it’s tailored to just the right length without a single identifiable wasted word or note. It’s well nigh impossible to dislike this release. Stephanie Rose may be at the start of her career, but she writes and performs like someone born to follow this path and you’ll find yourself happy to make the trip with her