Flatt Lonesome - Silence in These Walls 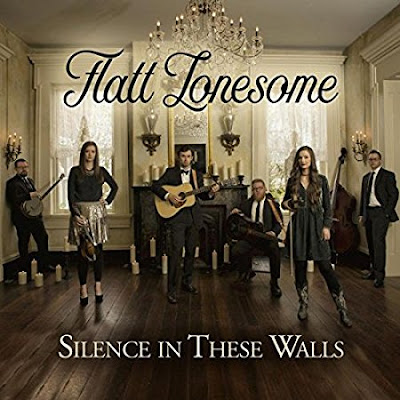 
The unique beauty of Silence in These Walls, the fourth album from critically lauded six piece band Flatt Lonesome, isn’t solely explicable thanks to their mastery of the classic country/bluegrass style. It’s their talent for placing a meaningful piece of themselves in these time tested forms and transform them into something uniquely their own that makes the twelve songs on Silence in These Walls stand up and be noticed. The band’s songwriting axis revolves around the twin creative forces of Paul Harrigill and Kelsi Robertson-Harrigill. Both make enormous vocal contributions to the album, but it’s Robertson-Harrigill who really makes her presence felt with a handful of tour de force vocal moments that show a truly great singer gets by every bit as much on how they sing, when they don’t sing, and how they tailor their approach to the music of each song.
Much of Silence in These Walls has a serious bent. The wont of modern performers and writers in this style is that they approach the genre quite literally – the extent of their artistic vision encompasses dire or despair narratives and precious little else. “All My Life” certainly qualifies as serious but the weighty listen is mitigated by the lush musicality of Kelsi Robertson-Harrigill’s voice and the support she receives from the band’s other backing singers, particularly Charli Robertson. It is a much more solidly bluegrass tune than much of what comes later, but there’s a mix of influences that make this a potent brew. “Build Me a Bridge” is some truly clever songwriting that the band gets off crisply and with great feeling. They bring together a combustible blend of country and blues to make this acoustic fare pop in unexpected ways. “I’m Not Afraid to Be Alone” is the album’s best ballad and a resolute statement of purpose against the vagaries of love. It’s far and away Charli Robertson’s most convincing vocals.
The tempo is much more controlled, deliberate, on “Draw Me Near” and this inspirational tune penned by Robertson-Harrigill finds a fantastic interpreter in Buddy Robertson’s singing. He shows the same emotive skill and patient attention to detail on this ballad that Charli Robertson shows on in the aforementioned track and it makes for one of the finest moments on Silence in These Walls. Their penchant for giving time on their releases to inspirational or spiritually minded songs presents listeners with another satisfying side of their musical character. “Where Do You Go?” is a track the band draws from a 1970 Glen Campbell release and one cannot help but idly wonder if, with his recent death, the selection isn’t intended as some sort of tribute. Regardless, it is another peak on a release that provides a lot of rewarding moments. The last third of the album includes a couple of more upbeat numbers and a cover song for the finale. The first two songs are playful relationship oriented cuts, the first full of some optimistic yearning and the second an outright love song.
“Happy ‘Til He Comes” brings out the toying side of Flatt Lonesome’s musical character while “Falling” embodies a romantic side that’s certain to pick listeners up out of any malaise. “You’re The Reason” has been a hit in previous versions and could prove to be one again. It’s one of the few outright commercial moments on Silence in These Walls that could play on country radio and they’ve done it while remaining true to their musical vision. It’s a remarkably confident and detailed approach to making music that fills this album. Flatt Lonesome, with this release, can lay firm claim on being one of the best roots music associated acts working today.