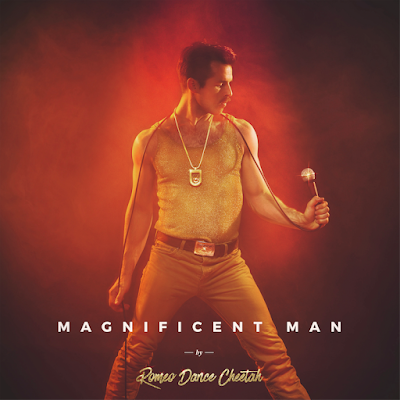 
Missouri born songwriter and vocalist Romeo Dance Cheetah is a singular performer in a day and age when carbon copies rule the roost The comedic sensibility he puts forward on many of Magnificent Man’s tunes is quite different from anything you’ll hear in modern performers and has an individualistic streak that runs a mile wide. Cheetah brings a visual sense to his lyrics and music alike that’s also manifested in his busy YouTube channel that’s used as a platform for his short music and sketch comedy films. There’s nothing going on in modern music today that blends the same tendencies in comedy with occasional dashes of seriousness and a heart that shines through under every context. Magnificent Man features a lot of rock music, circa 1988-1994, but there’s more here and the sensibility that goes into making these songs what they are has a surprising, perhaps, amount of nuance.
Magnificent Man’s title song provides the song’s opening curtain number and it gets things off to a heavy start. It’s a song that couldn’t possibly sound bigger and Cheetah’s ambition, cloaked in a clown’s mask, is quite clear. It’s a mistake to not take him a little seriously because he is doing more than just entertaining audiences; songs like this are making the case that a musical form thought shallow and dated can be made to live again in a modern context. There’s no doubt, however, that the lyrics for this opener are unexpectedly careening, weird fun. “35 Year Olds Dancin’” is a little more conventional so far as songs spoofing a subject go and it has some hard pushing guitars that give the words and vocal a lot of extra impetus. “Party Poopin” might have a sophomoric title, but it’s actually another intelligently constructed tribute of sorts to eighties AOR and arena rock with its echoing drums pounding out a simple tempo that the vocal and accompanying instruments fill out with a rough edge. “The Air Guitar Song” is cut from similar cloth and has an even sharper sense of humor that really captures the silliness sometimes present in its subject matter.
“Gone with the Wind” could have been a heavy handed failure in the hands of a lesser band, but Cheetah makes this heavily plotted out performance work despite its obvious turns. The sheer force of his personality really aids in this. “Laser Beam Makeup” has some pretty goofy lyrics that his delivery also redeems – the straight tone of voice he takes seems to normalize it some and allows listeners the distance to laugh. The final song “Live the Dream” has a much stronger pop sound than any of the aforementioned tracks and the decision to abandon the rock posturing defining much of the album gives it a different slant at its ending. Romeo Dance Cheetah’s Magnificent Man shows the promise of a performer who’s graced national television programs, entertaining scores via YouTube, and his promise seems boundless at this point.