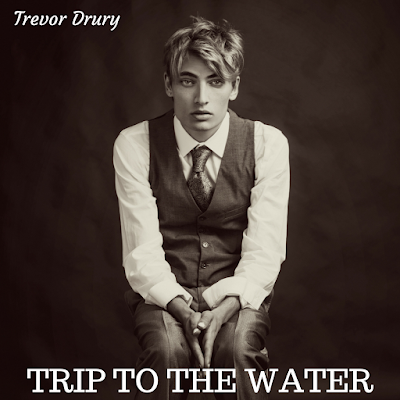 
The current single by Trevor Drury – Trip To The Water, comes out of his deep well of music that he’s been at ever since he began taking lessons and soon became thoroughly obsessed with the art. He later went on to study vocal performance at San Diego State University. And that’s just the music side of life for this artist, as he also became an international model in the-midst of forging a career at his first passion.

His influences range from Elvis to Radio head, but he can be compared to any of his peers if you’re up on today’s flavors of the form. He stacks up well with everyone helping him produce a great single.

Something classy this way comes, with Drury getting as good as it gets on this amazing story of sorts, with a realistic feel that won’t stop once you turn it off, because it stays in your head, so why keep it there for all it’s worth. You don’t hear this unless you’re looking for it, and that’s just putting it mildly with ballads you either love or loathe. But I don’t want to give away the pace, I’ll just say that is comes in the shape of more than one speed. It’s safe to say that if you don’t do well with ballads, you can also look into his other songs like “Childhood Friend” and Water In The Café” – speaking of “water.”

At first it doesn’t demand your attention so much, but then it gets interesting once he gets past the first few chords and lets a verse by. The pause it goes through doesn’t entice, but then everything comes alive and you’re hooked. It’s a cerebral treat once you’re under the entire spell he weaves. I wasn’t sure myself where he was going to go, and that reveals enough about it to hopefully entice before hearing it, so readers don’t give up before they more than likely become enormously impressed. That’s where it gets incredibly cool and I leave it up to recommendation.
He’s is never boring or sappy, but his voice does go through a few changes that throw you off, but he wins you back over if you don’t give up and turn this precious tune off. You can weed out what you don’t like about it and there will be enough left to please you ten times over. Let’s put it that way. It’s hard to deny from the first note to the last and plays like an anthem for the state of the nation, but that’s just one way to look at it. The theme has nothing to do with politics, it’s about the human condition and where to find peace and tranquility, which is where the water ultimately comes in.

It’s not hard to connect the dots yourself, because that’s what the single is about doing, one way or another. The way it plays out is just through his trip to where he draws the light from. You can apply it to wherever you believe the source comes, and that’s the best thing you can do with any piece of good music.

Trevor Drury has his aim in the right direction, following the right path to his own destiny, and he’s taking people with him. But it’s also not his only path, and that’s a testament of what he has to offer the world in more than one industry, which he’s proving can go hand in hand.