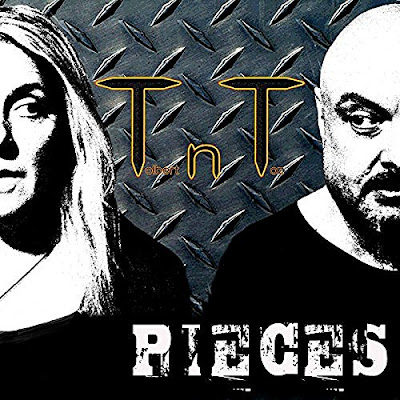 
Tim Toz and Joy Tolbert are longtime veterans of the East Coast music scene and the long years spent honing their craft are apparent on their latest release under the banner TnT Music, “Pieces”. The song is ripped from the tradition of dealing with heart ache and the songwriting expresses itself with magnificent eloquence without ever sacrificing its accessibility or actually tilling new ground. Their collaboration largely exists over the Internet, but they haven’t let their distance dictate the direction of their work. Instead of feeling constrained, they’ve proven quite prolific and have produced over twelve songs since their initial meeting on Soundcloud. The latest “Pieces” rank as their most fully realized collaboration yet and touches, even lightly, on a number of stylistic voices that they bring together artfully and without any visible stitching.


It’s clearly a studio confection at certain moments. The opening has a pleasing mesh of lightly applied keyboards and harmonized vocals before giving way to a brief, but very flashy, electric guitar introduction. Everything feels a bit studied and constructed before the first verse. The pomp and circumstance clears out and a warm acoustic guitar wafts out of the rubble. Tolbert’s voice joins in with a refined blues tone guiding the way. Her vocal is really the song’s gleaming highlight. She takes care, without ever becoming too stiff and rigid, to mold the words around the musical accompaniment and it pays off in giving the track a much more considered air. The carefulness she shows extends to Toz’s musical response – in contrast to the brash opening, the verses and even the impassioned choruses are tastefully and organically laid out for listeners. The changes move in a very coherent fashion and, when the ending comes, “Pieces” clearly resolves itself.


The lyrical content is a rung above the usual text in songs like this. Tolbert, fortunately, isn’t content with trotting out a familiar series of tropes that merely hit the marks for songs of this subject matter. Instead, she seems quite intent on rendering her experience and feelings in the most personal terms imaginable. There isn’t any overt suggestion of a confessional mode working here – while she writes from a first person point of view, Tolbert’s focus is on making universal points rather than weighing us down with the minutia of her heart ache. The singing aims at a similar effect through her refusal to overplay her vocal. There’s never a moment in her performance when the weight of her vocal pulls the song down into ham-fisted dramatics. Instead, the aforementioned attentiveness serves her well for seamlessly bringing both the musical backing and voice together.


“Pieces” reminds those of waning faith that even veteran musicians in the indie scene are still producing work that invigorates and challenges their audience. Toz and Tolbert work supremely well together and it doesn’t seem to be a labored process – based on their productivity alone, they’ve obviously discovered they share a sympathetic musical vision. TnT Music might not be headlining Madison Square Garden, but they certainly play and invest their enthusiasm into the material as if they were.

Posted by Scottie Carlito at 9:17 AM