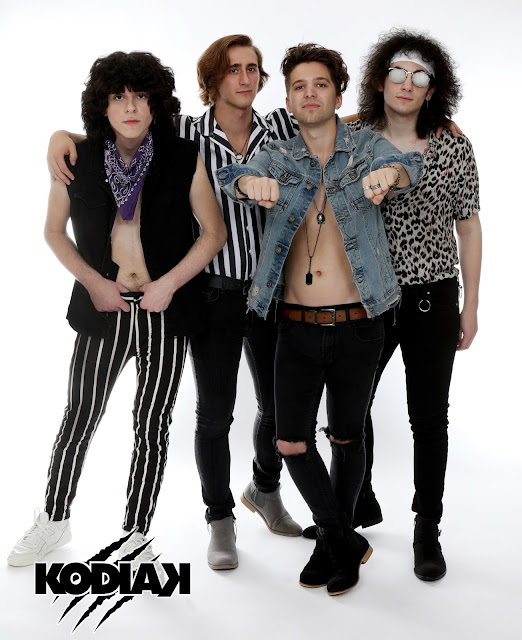 If hard rock is a dead genre, let’s be grateful no one ever told Kodiak or producer/rock legend Carmine Appice. Appice mans the production booth for the New Jersey band’s debut release and they’ve kicked off its initial promotional work by releasing two impressive singles capable of whetting even the most jaded appetites. The newest single “Alone”, like the first, is released with a video as well. It has more than a little artistry working in its favor thanks to its creative use of animation and color alongside traditional footage and communicates the customary sense of unity and shared vision any new band feels trying to realize their ambitions for stardom. They say hard rock bands have a rough way to go nowadays with the commercial ascent of modern country and rap music, but the landscape is more hospitable to such acts in 2019 than years past. Bands like Kodiak and Greta Van Fleet are reminding a new generation of the guitar’s potential and how sweeping hard rock anthems with memorable hooks can unite audiences and leave them feeling physically invigorated.

Moreover, it doesn’t need to be facile. “Alone” definitely has a commercial edge any attentive listener will note soon enough, but it has an adult point of view rather than just regurgitating well worn subjects like women, cars, and the fleeting joys of youth. They play and sound far more mature than their years. Another indication of that is their nonchalant refusal to indulge flashiness in a meaningful degree. There is some flair to this performance, for sure, but they apply those moments with artful restraint. The lead vocals are wide open and brimming with energy and emotion. Charismatic front men are every bit as much the bread and butter of this style as first class musicianship, particularly on guitar, and Kodiak checks that box in a big way. You never sense the musicians or vocals are out to prove something, per se, but they both exhibit boundless confidence in themselves and the material that helps make listeners believe every second of the performance. The chorus and subsequent refrains are the musical highlight of the track for me. Everything comes together in those moments and the band knows exactly how to make the most of those climatic moments without ever obscuring the value heard elsewhere in the track. Their transitions between verses and choruses alike show surefooted skill and an understanding of hard rock dynamics that many bands never consistently master. It is all the more impressive when you consider the band has been together less than two years at this point.

Kodiak are more than just potential; their two debut singles point towards promise fulfilled. The debut album will further flesh out the scope of their accomplishment when it lands, but I am confident enough in their talents to say, without question, the sky is the limit for this New Jersey based four piece band. They have the necessary ingredients for a long and substantive career rather than sounding like a flash in the pan. I’m eager to hear the debut album in full and you will be as well.