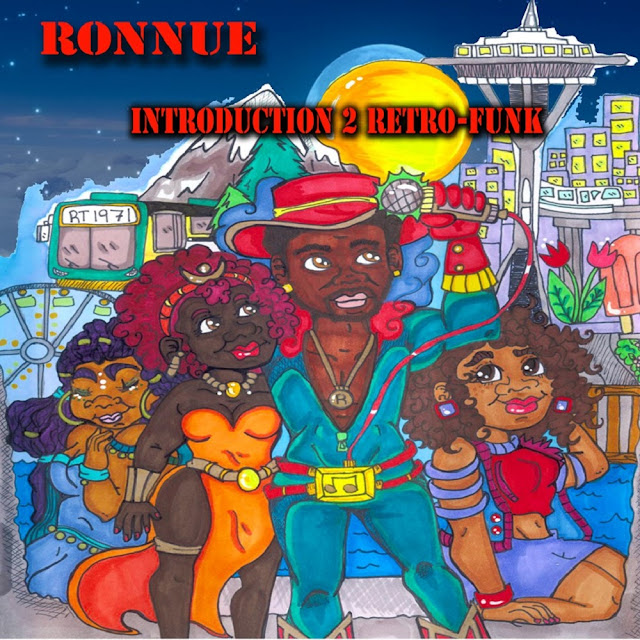 A thick, bumpy bassline menacingly flexes its muscular tone. In its wake, a sizzling synth comes scorching through the center of the track, paving the way for Ronnue to drop a monstrously melodic lead vocal in “17 Days (The Hood Mix),” one of the most haunting and harmonious songs found on his latest album, Introduction 2 Retro-Funk. Ronnue is taking us back to the golden age of hip-hop here and ironically sounding more progressive than many of his experimental peers have recently. Introduction 2 Retro-Funk is an unstoppably addictive offering, and compositions like “17 Days (The Hood Mix)” are the reason why. Ronnue’s lyrical attack has never been stronger than it is in tracks like “Something About U (The Retro-Funk Mix),” “I’m a Lesbian,” “Why,” “If We Stayed 2gether” and “Give in 2 Me,” not to mention his technique is noticeably more efficient than it was in past outings. He’s using the full depth of his vocal in these songs, but more importantly than that, he’s developed a really unique flow that sets his verses apart from most anyone else in or out of his scene at the moment. There’s no question who is at the mic when he sings, and that’s half the battle in becoming an icon nowadays.

This mix is boastfully unsophisticated from beginning to end. It’s downright guttural in some spots – namely “I’m a Lesbian,” “In Love” and the ferocious funk of “You Tried Me (The Man’s Anthem)” – and it makes all of the music that we hear in this record feel and sound so much more authentic, hard-edged and fresh as a result. Ronnue was brilliant to stay away from a traditional pop sound on Introduction 2 Retro-Funk; he’s getting a ton of positive press for his decision, and I can see it having a big impact on his local scene moving forward. The lead singles here, “Something About U (The Retro-Funk Mix)” and “Be Your Freak,” were definitely well-chosen from this tracklist, and I think that they hold just as much appeal to the college radio crowd as they would the occasional R&B fan curious about the new and exciting sounds coming out of the Seattle underground this summer. It’s been a rough decade for indie rappers and experimental funk artists like Ronnue, but if he can move the needle a little more towards his scene’s direction, finding a home on the mainstream side of the business won’t be very difficult at all.

Introduction 2 Retro-Funk is one of the strongest candidates for album of the year that a west coast urban pop songwriter has submitted in the last decade, and even if you’re not up to date on the Northwest beat that produced Ronnue in the first place, you should take some time to give this record a listen this August. Ronnue is making some bold moves on his latest album, striving to make something different from what his contemporaries are, and most of all, giving the summer the added dose of funk that it has been in need of since the end of last June.

The music of RONNUE has been heard all over the world due to the radio plugging services offered by Musik and Film Records. Learn more - https://musikandfilm.com
Posted by Scottie Carlito at 1:30 PM