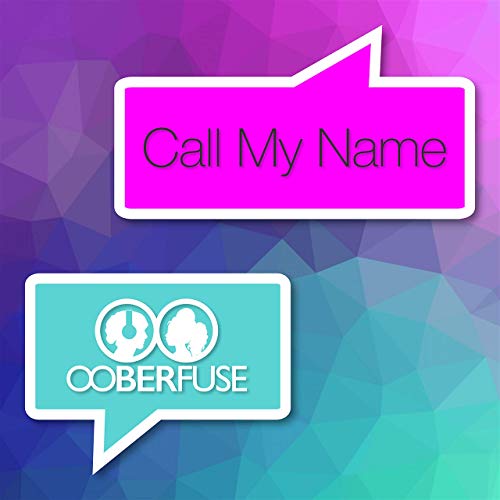 Through the thick, surface-level grooves and melodies that we find in the first sixty-seconds of ooberfuse’s “Call My Name – Push The Frequency Festival Mix,” we see specks of a bass tone that will slowly grow into a suffocating, unmatched force in this remix, which is only one of five found on ooberfuse’s new Call My Name EP. Trying to escape the clutches of this subtly surreal harmony and it’s uncompromisingly strong bassline prove futile in the next couple of minutes that follow, and as we look deeper into Call My Name, we discover this isn’t the only bit of sonic sorcery that the record contains.

Emotions are raw in “Call My Name – Hal St John Radio Edit,” and they all start with singer Cherrie Anderson, whose heart is on her sleeve as she lays into the first verse with a soft, Cocteau Twins-like ethereality. Her vocal is pleasant and pondering, which makes the whimsical swing of the percussion even more thought-provoking than it already would have been. It doesn’t surprise me that St John nailed this track as well as he did – after all, “Call My Name” is a direct product of the compositional chemistry he has with Anderson when they’re making music together under the ooberfuse moniker. “Call My Name - The Noise,” as well as “Call My Name – Paul Kennedy Radio Edit,” seem like ridiculously cautious efforts in their own right when compared to St John’s edit and the Festival mix, but deliberately so.

Everything – from the percussion to the very crunch that the bassline makes in the Kennedy edit – has a very specific part to play in creating as moody a narrative as producers can in these two mixes, and while they’re not the easiest to digest of this tracklist, it makes total sense that they would be included here just the same. The music video for “Call My Name,” featuring Paul Kennedy’s treatment of the song, is really good, clean electropop fun, and personally I think that it isn’t so all-encompassing that ooberfuse couldn’t make four additional videos for the other remixes as well. Each one of these tracks is so unique and different from the others that they sit next to on the EP, and as much as the generic look of the Kennedy video will probably jive with audiences from one side of the globe to the next, I think that it doesn’t necessarily represent the full artistic capabilities that ooberfuse are becoming known for with their studio work.

Though it’s fair to say that the Call My Name EP was conceived with the serious European club-pop fan in mind, there’s no reason why it shouldn’t appeal just as much to Americans and other electronic-crossover buffs around the world this summer. Ooberfuse have been peeling back one layer after another in their incredibly melodic sound for over five years now, and I think that with the release of this new record, they’re showing us their most cultured style of play thus far. I hope to hear more before the year is out, and with all the buzz they’re getting this season, I think I’m going to get my wish.