The Best of Matthew John 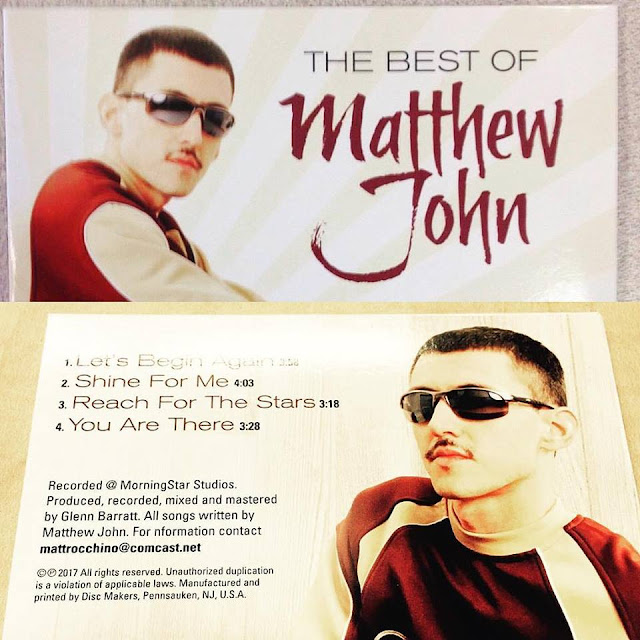 “Shine for Me,” track two in the four-song compilation The Best of Matthew John, might start off a little slower than most pop anthems do, but what it unleashes over the course of the next four minutes is anything but slothful. It is in this composition that Matthew John shares with us some of the most emotional singing he’s contributed to a studio record, but as entrancing as this brilliant slice of musical swagger is, it only accounts for a quarter of what The Best of Matthew John contains (both figuratively and literally). I came across this 2018 EP just recently, but I’ve definitely become hooked on everything that it represents from an aesthetical perspective.

This is good, clean pop with a touch of old fashioned soul where it counts the most. The percussion in “You Are There” is tucked beneath the stirring lead vocal of John, but it’s strong enough in the master mix to make a noteworthy impression on anyone who has their stereo playing at a decent volume. There’s a lot of texture in its finish, a lot of emotion in its calculated arrangement, and yet it doesn’t feel even remotely overcomplicated in structure. Judging from the way that Matthew John approaches the mic in this track, he doesn’t get intimidated by cerebral compositional concepts, nor does he have any issues attacking a really swanky verse like he was born to serenade us with its message. He isn’t an international superstar, but he sure sounds like one in songs like this one.

“Let’s Begin Again” is the Matthew John song if there ever was one. As confident as he sounds in the other recordings on this EP, it all pales in comparison to what he does in this track, which features a Cheaters-esque dangerousness to its hook that isn’t all sizzle. There’s substance in every stitch of this song; the guitars grind against a chic bassline as if to dump fuel on the fire of rebellion that exists within each and every one of us, the drums echo the broken cadence of a weary heart, and the vocal harmony that binds all of the pieces together howls with the ache of a hundred hungover mornings spent staring at old photos on the bathroom floor. John doesn’t just act cool in “Let’s Begin Again;” he’s cool personified. I’ve always had a soft spot for easy listening-style pop, and tracks like “Reach for the Stars” are the reason why.

Matthew John reiterates a rousing narrative through simple, albeit heartfelt, poeticisms that don’t devolve into cheesiness (even when it might have been catchier to do just that). His talent is all-natural, untainted by the external, non-artistic influences and still charged with a potential that has only been somewhat exploited since his arrival on the scene some years ago. These four songs might be the hardest-hitting numbers that he’s got in his discography at the moment, but something tells me that they give us but a limited melodic mockup of what he could accomplish if provided a more liberal recording budget.