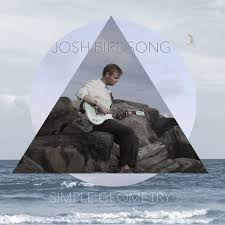 
Everything has changed. If Billie Holliday or Hank Williams Sr. returned today to survey the modern music world, they would understand little. Even songwriters achieve prominence in vastly different ways than before. The idea, even thirty years ago, that young men and women could pursue high level college degrees in the art of writing popular song was unthinkable. It is now par for the course. Birdsong has been academically honored for his musical talents by the University of Michigan, Belmont University in Nashville, and has garnered awards for his lyrical talents. These laurel leaves give Birdsong a burgeoning reputation as a bright young talent that his debut EP, Simple Geometry, will only further burnish and expand upon. The five songs making up this first release show Birdsong isn’t ever confined to one style and approach. Instead, he is an open-ended conduit of his own talent who feels an obvious freedom to touch on different styles and approaches in a single song as well as the entire recorded work.


Everything has changed perhaps, but maybe for the better. We have more sources now. It’s hard to see these particular developments as a bad thing when you hear a song like “Unspeakable”. Despite our familiarity, as listeners, with things like effects-laden guitar, the see saw struggles between men and women, personal transformation, this song sounds truly new. Much of the responsibility for this comes from Birdsong’s distinctive approach to his instrument and how he completely merges his vocal with the arrangement. The dynamics of the first two songs owe much to the classic build for rock songs – new sounds are introduced along the way and, by the time the song moves past its mid way point, the full band is working at top volume. “Drive” is a much more relaxed effort, comparatively, but there’s great energy here despite that difference in moods.


Birdsong returns to the winning formula of the EP’s first two tracks for the fourth, “Why?”, but he can’t resist twisting the template for the better. This is a more dramatic outing than either of those earlier songs thanks to the underlined focus on contrasting muted passages with much busier sections. Birdsong sounds completely at home here and that confidence enhances the song overall. Simple Geometry concludes with the solo performance “You and I”. This is Birdsong at his most vulnerable, armed with only his voice and an acoustic guitar, and he proves himself every bit as able to believably carry this sort of material as he proved to be with the earlier performances. While the lyric’s subject might not be particularly new, Birdsong sings with such passion that you’d be forgiven for thinking he’s the first guy to ever sing about relationship issues.


Simple Geometry is part of a new paradigm. With songwriters emerging now in such a wide variety of ways, the music is deepening and reflecting those diversities of background. The intelligent and literary presentation here on Simple Geometry never comes into conflict or otherwise undercuts the musical value. Josh Birdsong’s talents are formidable and we only get a tantalizing taste here.


William Elgin III
Posted by Scottie Carlito at 11:38 AM