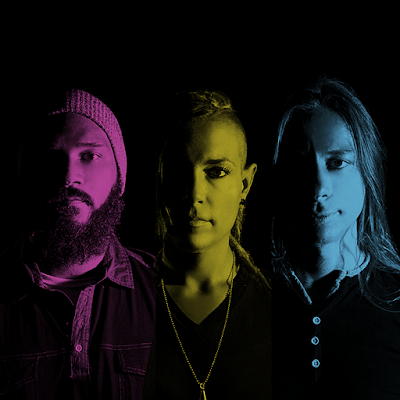 
Few power trios escape the leaden thud so common to the configuration like South Florida’s The Von. The band has established a great and growing reputation as one of the best young rock bands on the scene since their 2013 formation and their second recording, 3nity, solidifies that growing standing with a loosely threaded conceptual work that never forgets to entertain its audience and rocks out with conviction. None of the album’s songs run over four minutes in length and the opener is especially brief, but these are songs that lack nothing. Instead, they contain sonic multitudes and exhibit a stunning combination of finesse and power. The production is another notable strength – there’s a big sound here driven by intimacy. The Von sound like they are playing in a crowded, hot, and sweaty club sometime before last call and still in full flight.


“I Know It’s Love” is the EP at its power pop best. It bears mentioning that the type of power pop The Von brings to bear is considerably more powerful than average entries in that realm. Bassist Luis Bonilla and drummer Elisa Seda form a powerhouse tandem in the engine room, but they bring great fluidity together with their sheer sonic force. The practically acapella beginning kicks things off in an unusual way, but it doesn’t sound out of place at all. The Von are quite talented at making the music breathe and leaving artfully shaped and chosen spaces of silences in the song that added a lot to the listening experience.


“Nature of the Beast” is the EP’s high point as The Von delivers a swinging knockout with a fierce guitar attack and meaty rhythm section work that makes the breastplate rattle. This is a perfect example of the observation made in the first sentence – The Von’s performance here is hard hitting, but never immobile. The lyrical quality here, as elsewhere, is very high – they never lean too heavily on standard tropes, only just enough to create some resonance for the listener. The song title, for instance, is a loaded phrase with multiple meanings for many people and engrained in our cultural lexicon. It’s a mark of highly intelligent songwriting.


The final cut on 3nity, “My Heart Machine”, gives us a glimpse of the band’s affinity for psychedelia. It’s more of a genre hybrid than it is a straight bit of psychedelic music, ala Hawkwind or other similar “space” acts, and retains enough hard rock credentials to make labeling difficult. Bonilla delivers his most nuanced performance yet on vocals – he brings full throated fury to bear in some passages while showing a seamless ability to lean back and concentrate on relaxed phrasing. It’s a wildly successful conclusion to this EP and achieves all of its effects honestly rather than relying on cheap pandering to the listeners. The Von never indulges themselves too much and maintains a resolute focus on delivering maximum effect with little visible strain. 3nity is a memorable effort.


Montey Zike
Posted by Scottie Carlito at 9:01 AM