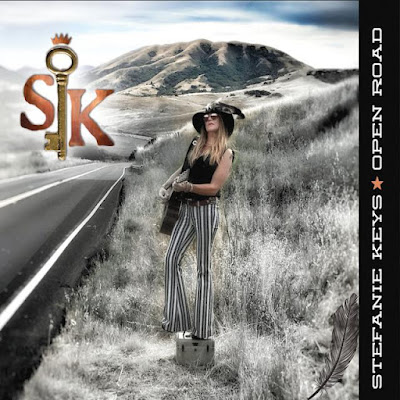 
California based vocalist par excellence Stefanie Keys’ third album Open Road is the peak of her recording career so far. The ten songs included with this new release are a deceptively ambitious group of compositions that doesn’t necessarily experiment, but it certainly explores virtually the full purview of Americana music with a wide open spirit and impeccable chops. The songwriting doesn’t attempt to remake the wheel but instead begins with the fundamentals and builds from there. She isn’t afraid to move from a gently rendered acoustic track into a slow burning and muscular soulful rocker. Credibility and confidence alike come from every song. The album has superb production that gives it a spacious quality while still surrounding it with the right amount of musical weight.


The title song starts the album on an excellent note. She’s obviously a patient performer and songwriter on this release, content to allow songs to develop organically, and never attempting to force the song’s potential to bloom too fast. Her vocal phrasing is dramatic and attempts to fully embody its imagery and storytelling aspects. “3 Hours Till Yesterday” is one of Open Road’s cleverest bits of songwriting, but it doesn’t crassly announce itself or pander. The same energetic but careful confidence electrifying the earlier songs is present here as well and the band’s inspired response makes the song even better. Her storytelling talents as a lyricist come to the fore on “Sleeping Lady”, but it reaches high musically and makes a sonic impact as well. Her penchant for a well-assembled song comes through here too. Few listeners will expect the late turns it takes, but they will be happy they came along for the ride.


“City Life” is an immensely stylish outing, but it isn’t all gloss and no substance. Keys’ musical cohorts turn in their most nuanced performance yet and create a deeply felt and bluesy landscape for her voice to inhabit. The slowly unwinding, even stately, quality propelling “Cold Day” forward is quite appealing and Keys’ writing skills shine through once again. The vocal effects applied to Keys’ singing in post-production might not appeal to some, but others will undoubtedly find that they add much to the song’s mood and narration. “Highway To Your Soul” is one of the album’s most convincing and rugged tracks. The solid base the band gives Keys to work from allows her the chance to let loose her most passionate vocals yet. Open Road’s highest point, lyrically and musically, comes with the character-driven track “Amos Crain”. There isn’t a single other moment in these ten songs when vocalist and musical arrangement come together in such a simpatico fashion.


Open Road ends gently with the track “9 O’Clock”. There’s a lovely effect achieved with ending the album this way – it works as a final, emphatic period on the album’s overall coherence of mood and theme. Much of Keys’ work is centered on character and voice and this last song embodies those strengths quite well. Her third album is truly a moment when it all comes together for this great singer and songwriter.