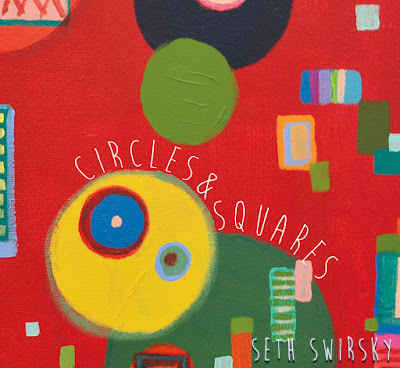 
There’s a bit of the bittersweet sprinkled throughout the sixteen songs on Circles and Squares and it begins with the album title. Seth Swirsky’s songwriting makes great hay of the eternal struggles between men and women in the name of love and his unfettered sincerity will win over many. His skills go far beyond mere earnestness however. Swirsky’s compositional style thinks big picture and even the album’s minor songs are driven by inspired, high flown melodies and spot on harmony vocals. It’s a skill set he’s honed over a thirty plus year career as a working songwriter and the sixteen songs compromising Circles and Squares reflect the mastery of technique that raises his artistry up another level.


“Shine” opens the album with a Beatlesque flair of melody and an airy arrangement that never seems to touch the ground. “Circles and Squares” is one of the album’s marquee numbers and features a number of inventive tempo changes and turns in texture capable of drawing even the most cynical listeners into its web. Swirsky pulls out some light rock chops on the slightly unsettled “Old Letter”, but even this rawer moment is driven by a strong, definable melody. Swirsky’s quite capable of working up the extra oomph required for this song. He takes his first run at an enormous, cinematic ballad on “Far Away” and its glittering surfaces are served further by the song’s elegantly phrased melodies.


The mid-tempo saunter and warm, lighthearted vocals of “Trying to Keep It Simple” help make it one of the more likeable songs on Circles and Squares and creates an interesting contrast with the sometimes bittersweet nature of the lyrics. The tempo varies some on “Belong”, but eventually settles into a steady  but non-aggressive groove that slowly rolls over the top of the listeners. It has an understated odd edge, a slightly twist on the melody that distinguishes it from its obvious influences. “The Simplest Way” is one of two absolute stunners on the album that are unmitigated love songs. This is the more fragile and delicately wrought of the two despite its moderate pacing and has a sensitive, but palpably charismatic vocal from Swirsky. “With Her Now” is a song of pure longing. The hushed quality Swirsky brings to his vocal doesn’t make the longing any less apparent; instead, it has the feeling of desire barely restrained. The second brilliant love song on the album, “I Don’t Have Anything (If I Don’t Have You)” has more of the earnestness mentioned earlier than, arguably, any other song on Circles and Squares. It hits all of the expected, satisfying notes musically and sets itself apart lyrically thanks to Swirsky replacing all the standard tropes from songs of this type with genuine personal confession that anyone familiar with his biographical details will recognize.


Circles and Squares isn’t bashful about flouting its influences, but those influences never dictate the songwriting. Instead, they infuse the tracklisting with an added strain of color and provide a frame of reference for some listeners to hang onto. Seth Swirsky has been at this a long time, but it’s well past time that his audience gets a true solo effort from him, released under his own name, the spotlight his alone.