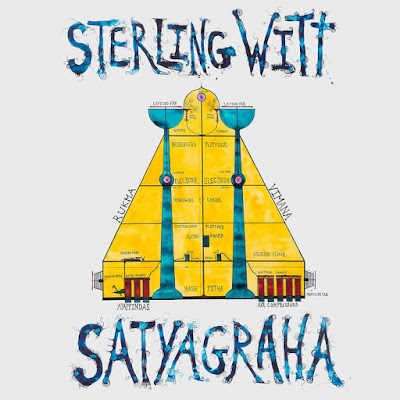 
This decade is nearly in the books, but it has more gems to share. The most recent addition to any listener’s “best of” lists for the second decade of the 21st century should include the fifth full length release from Kansas City headquartered songwriter, vocalist, and guitarist Sterling Witt. His new album Satyagraha debuts his latest configuration, a power trio, and the format is ideal for the work’s thirteen songs. Melody isn’t in short supply here, everything Witt plays has a purpose and a plan, but it’s equally obvious that Witt’s artistic vision for this album stresses a live, “three on the floor” sound  as well as a minimum amount of excess or dross to divert listener’s attention away from his always solid and occasionally quite exceptional lyrical content. He has a definite personality as a vocalist as well – these songs are well served from his laid back, laconic vocals, but he has a deceptively wide range and is able to summon regret and rage with equal facility.


The first two songs of the album are devoted to sharp and melodically gifted rockers that eschew much in the way of subtlety in favor of getting over its message to the listener. “Perception Deception” and “Love Me to Death” are likely slotted for their respective positions in the track listing because much of Satyagraha plays like a live show – Witt clearly wants to put his best foot forward kicking things off and two attention-grabbing guitar workouts like this are guaranteed to garner attention. There’s a shift that comes with the third song, “Who Do You Listen To?” that much more clearly defines the album’s thematic ambitions. In Witt’s world everything is up for examination and rightly so. “Who Do You Listen To?” confronts a world full of misrepresentations without flinching and does so with crackling guitar work and lyrics that never bite off any more than they, or the listeners, can chew.


“Make It” has more attitude than most songs on this album and that’s saying something. Witt’s cynicism comes through, but it’s difficult to find fault with his observations and the music frames his thoughts in quite a bracing way. “Just So You Know” matches “Make It” in the attitude department and gives Witt a chance to fully vent his spleen, but it’s never artless. Instead, the go for broke abandon doesn’t denote a band and songwriter mindlessly blasting away, but manifesting commitment in the most uncompromising way possible while still strictly adhering to musical principles. The pensive roll of “The Answer” is a welcome shift, however, because it reinforces the aforementioned ideas while allowing the band a chance to show off their diversity.


The album’s final peak, “I Love You More Everyday”, is the album’s lead single and the choice couldn’t be better. It brings sharp lyrical observations together with a little underplayed humor Witt’s vocal is the vehicle for that humor and his wry, nicotine and whiskey voice has phrasing skills that continuously surprise listeners throughout the release. Satyagraha is the sort of album that reveals more and more with each additional listen and forever buries the idea that there’s nothing particularly new in this genre/. Artists like Sterling Witt, with a voice clearly their own, revitalize the form with inspiration and conviction.